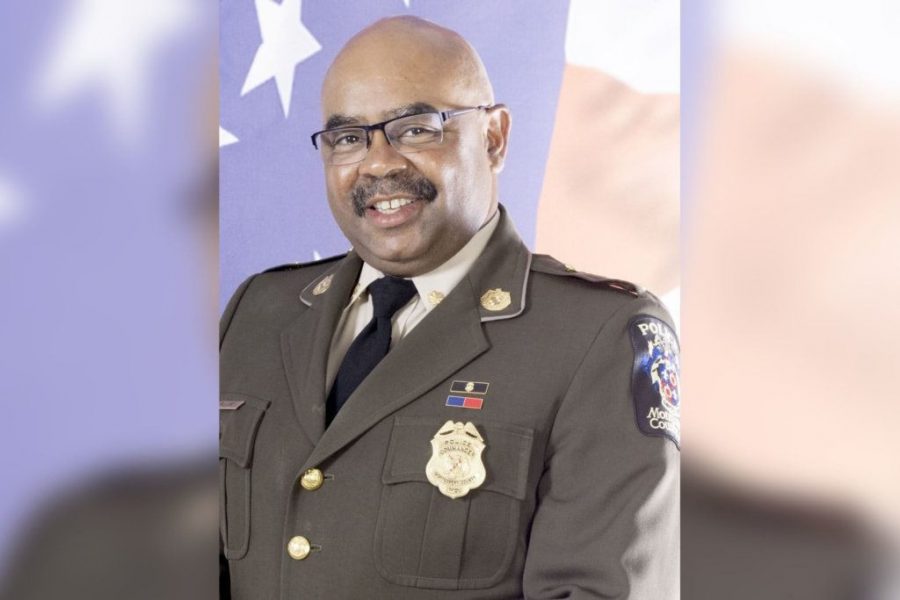 In a talk with Montgomery College President DeRionne Pollard on Wednesday, October 21, Montgomery County Chief of Police Marcus Jones addressed some of the weaknesses of Maryland police accountability and pled for more assistance from the county government in instances related to mental illness and poverty, However, he vehemently opposed the Defund the Police movement, stating that it is not clearly defined.

Dr. DeRionne Pollard virtually sat down with Chief  Marcus Jones, Wednesday, Oct. 21, as a part of her presidential dialogue series. This week’s talk was entitled “Building Racial Justice Through Policing.”

Jones was nominated by County Executive Mark Elrich and confirmed by the Montgomery County Council in November 2019. He is approaching his first anniversary as a police chief and has 35 years of experience as a sworn officer. He has launched an award-winning training program that is used in police academies nationally and served as the chairman of the National Black Police Association.

Dr. Pollard began the talk by highlighting the relationship between the Montgomery County Police Department and Montgomery College. “Montgomery County Police Department has been a terrific partner with Montgomery College over the last several years.” Dr. Pollard characterized the broad relationship by highlighting an array of collaborations from large-scale emergency preparation and planning, to guidance from police and safety experts for mass shooting protocols and protection, to the very robust criminal justice system program that MC teaches and lends its students to eventually work within MCPD.

Police accountability: in MoCo and the nation

One of the first questions asked was on the public perception that police officers are not held as accountable as civilians are.

Mr. Jones explained that there are different processes in each state and even from community to community. On the national level, courts can rule that an officer violated civilian rights within the “objectively reasonable standard,” as he put it. He went on to say that when utilizing deadly force, attorneys and juries have to judge based on the “totality of the circumstance. Deadly force means you have to articulate that your life was in danger or another’s; the courts have to decide if your actions were justified.” He said some rulings don’t appear fair to the public due to “a certain legal standard.” With these statements, he was alluding to qualified immunity, which he did not directly address during the talk.

Qualified immunity is a law that protects officers from being penalized for a crime if there is no precedent, which has shown to be detrimental to holding police officers accountable for anything from minor damages to murder.

Police Chief Jones advocated for the body-worn camera, which he said has changed the dynamic of stops and other police duties, but he emphasized that one or two cameras cannot tell the whole story. He asks of his officers that they be able to justify the force they utilized. If they fail to meet that task, then he assures “absolutely they should be held accountable. If they failed to see what they could have otherwise done.” He continued, “Protecting life, that is our job,” and said that sometimes officers are put in difficult situations.

The next question came from an MC student, Gus Griffin, about police unions protecting their own. He asked about the Maryland Law Enforcement Officer’s Bill of Rights and how it gives an “extra layer of due process rights not afforded to the average citizen and is this law in general still needed?”

Police Chief Jones explained how the Maryland Law Enforcement Officer’s Bill of Rights presents a unique situation for law enforcement leadership and accountability. Within the bill of rights, it is stated that upon an investigation into an officer’s conduct, there will be two investigations: a criminal investigation (if necessary) and an administrative investigation.

Chief Jones claimed that if an officer is involved in a shooting and the state’s attorney is pursuing a criminal charge against the said officer, the officer is awarded the same rights as any civilian. However, within an administrative investigation, there are certain rights given to an officer about the type of disciplinary hearing they receive.

After being charged, an officer can choose between a traditional hearing or an alternative hearing. In the traditional hearing, the officer has the right to a hearing board and an attorney provided by the union. At the end of the day, the police chief would provide a disciplinary recommendation that would be upheld if the officer was found guilty.

Most of the time, though, officers choose an alternative hearing board, which is arbitrated by a third, neutral party. This system, permissible by the Maryland Law Enforcement Officer’s Bill of Rights and allowed by the Fraternal Order of Police, allows for both the union and the police force to agree on an arbitrator and both would also have a representative – one from the police force executive office and one from the union membership to sit on the board overseeing the hearing. They would determine if the chief’s recommendation would be upheld, but they can lessen the chief’s disciplinary recommendation.

“They generally don’t go over my recommendation,” said Chief Jones. He claimed this system hinders his job, however: “If I’m looking to dismiss an officer and the group comes back with a lesser penalty, then that could create some rifts that create problems within our department.” He mentioned it’s been brought up in the Maryland legislature in an attempt to rid this section from the Officer’s Bill of Rights.

An initiative enacted by the state to address the lack of police accountability is the Law Enforcement Trust and Transparency Act (LETT). This law aims to bridge the gap between law enforcement’s aim on the one hand, and public perception and trust on the other.

Chief Jones said the law is moving us in the right direction, but it is not an answer to what we need. “It needs to take a bigger step forward.” Under LETT, other police forces in Maryland are meant to investigate allegations against MCPD but according to Jones, there is nothing that compels those other forces to do so.

MCPD has fostered a partnership with the Howard County Police Department for these matters but has a hard time reaching out to other departments. Jones believes the state needs to create an independent investigative unit taskforce to investigate allegations of excessive use of force by law enforcement across the state.

Training to avoid “a moment”

Next, Jones spoke on some of the training practices in his academy and department. Implicit Bias Training has been a part of MCPD training for several years. He has always been an advocate for such training but he said there is a need to move forward and learn more. “People can say: ‘I’m not biased,’ but we all have our biases, right?”

He talked about how he took the entire police executive team to the African American History Museum and how they subsequently “had great discussions because of it.” He also takes all recruits to the Holocaust Museum every year as a part of their training.

Jones also advocated heavily for Crisis Intervention Training. He has made it mandatory for all officers, which is mainly attributed to the fact that the last two fatal police shootings at the MCPD were that of young men with mental illness, Finan H. Berhe and Robert White.

“We are handling more mental health cases than I have ever seen, we get these calls on a daily basis,” Jones said. He called for a better way to handle cases of mental illness and wishes to reimagine public safety with a refocus on these issues within the county government and not the police. “Every situation can’t be looked at the same.” Jones teaches his officers to avoid creating “a moment.” He expressed a desire to avoid force when necessary and get people the help that they need.

Cheif Jones and Defund the Police

When the topic of the “Defund the police” movement came up, Jones stated, “I am totally opposed to the defunding dialogue that people are having.” He stressed that most of the budget goes to personnel working as officers or other administrative positions, and cuts could create gaps in policing.

Dr. Pollard explained the movement and suggests funds might be better allocated towards public safety and public health as Jones had previously stated in the talk. The county government and community has over-relied on the police in situations that could have been handled by community and social service agencies, especially in addressing mental illness and poverty (job training). She says that instead, “we’re underfunding the folks who actually step in the cut and help support the police to do the work we need them to be doing.”

Chief Jones responded by stating that the “defund the police” movement is not clearly defined and he would like to see to it that both the police and social service agencies are adequately funded.

He was one of 75 black officers when he entered MCPD and has taken the substantial effort to diversify the force, not just with black people but with a wide array of diverse officers that reflects the county they serve. Women police officers and their treatment has changed drastically since he started on the force 35 years ago, but there is still a ways to go and he’s working towards. He states that these changes show that there’s hope for more to come, of which he aspires to.